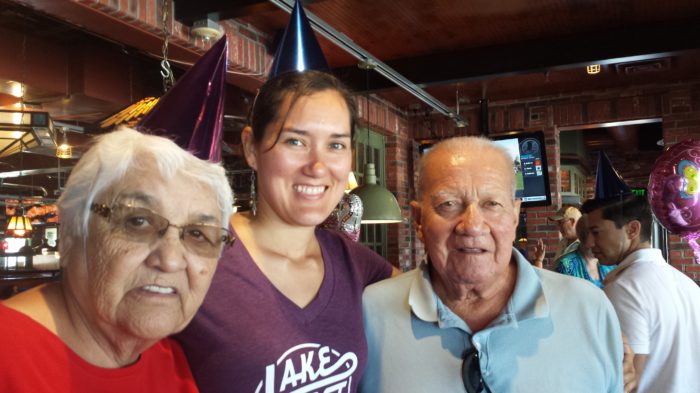 Hi everybody, today as I sit down to write and begin to ponder about continuing my crisis counseling blog series…I can’t. I can’t continue that series until I’ve addressed what has been happening in my world. It feels robotic and un-truthful to do that. I enjoy writing and feeling like this creates a relationship with those that choose to read my stuff.

So…what’s been happening in my life the past month? Well, my grandfather died on April 19, 2018 in the morning. He was getting in the car with my grandmother and his neighbor who was driving him to an appointment with a cardiologist. As my grandfather got in the front seat he began to have a hard time breathing and his heart hurt. The man with my grandfather was a friend and also happened to be a nurse and as my grandfather lost consciousness he gave him CPR. This man loved my grandfather in his own way and I am grateful he was there.

My grandfather had COPD and had been sick for a while. He had surgery on two of his vertebrae the week before because they were fractured. The weekend before he died I visited and that would be the last time I saw him. As many of you know, I practice a subtle form of body work, Core Synchronism. I gave my grandfather a session that weekend and I can’t explain the honor, gentle love and sweetness I feel about being able to be with him in that way the week before he left this human dimension. He became so relaxed and calm toward the end of the session. My lovely grandfather, what a beautiful soul.

As I write about this, I am getting emotional and the other patrons at the library are probably wondering what is going on with the girl typing on her computer and crying. It’s ok, I’ll let them wonder.

That weekend we spent with my grandfather before his death, my aunt and cousin also visited and we all helped my grandparents clean and organize a little; because they had recently spent so much time in the hospital for my grandfather.

Later, we watched a beautiful movie called Coco. It’s about a Mexican family in which a little boy wants to be a musician and his family doesn’t want him to. He ends up accidentally traveling to the land of the dead during the festival for Dia de los Muertos to find an ancestor that will give him permission to play music. The movie is a reflection of some of my family customs and styles. The movie is about honoring your family and ancestors, so that they are never forgotten. It feels poignant that we watched that movie together, as a family, the week before my grandfather died. After it was over, we all joked that we would then be celebrating Dia de los Muertos; almost foretelling what we would soon be going through as a family.

The day my grandfather died I was up earlier than usual and my dad called. I had a quick thought that something might not be quite right for him to call this early. He said that Pa (what my family calls my grandfather) had collapsed and it is pretty bad and he would call me when he knew more. I didn’t want to believe that Pa could be seriously hurt; so I continued my day as I would have without that call. I was in the parking lot at a school where I had an appointment for a client and my father called again. As soon as I picked up; my dad said….Pa died. I immediately felt grief and also an eerie sense of not knowing what to do and feeling a little lost. I can’t imagine what my father was feeling at that moment, having lost his own father and having to tell his beloved daughter about this death. My wonderful father kept stable and grounded for me to cry, he was quiet while I weeped over the phone with him. We got off the phone after he told me he was on his way to my grandparents house and I told him I would drive there as well. Before getting off the phone he said that my sister was having a hard time and that I should call her. For some reason, I was dreading hearing her cry or having a hard time over the phone; I was relieved when I called and she sounded ok, considering the news we had just received. In some way, I believe that if she would have cried uncontrollably over the phone, because I was also in shock I couldn’t have kept my ground. The pain was too much, too close.

I will interrupt this personal story to relate this to work for a moment. This is an important point for therapists and non-therapists to remember; just because therapists have training on managing emotions, doesn’t mean we are robots and can “control” our emotions. We feel them just like everyone else; and when we are in shock, grief or any overwhelming state, we get ungrounded just like anyone else would. So, therapists, be easy on yourself if you think you always need to have it together; that’s impossible. And other people who are not therapists; don’t expect your friends, family, loved ones who are therapists to always have it together or to be analyzing you when they aren’t working. It just doesn’t work that way.

My family converged at my grandparents home in LaJunta, Colorado. This was an experience that felt surreal to me. As I got out of my sisters’ truck, I walked to my dad and he was upset and I hugged him. He cried and we talked for a bit. I truly cannot remember exactly what he said. My grandmother walked over and we hugged. My aunt and uncle stood on the porch and my aunt was crying loudly. It was the picture of a family in pain after a loss.

Though it is hard to convey this; I also want you all to know that my belief is that the path to enlightenment, no suffering, joy, happiness is to feel pain and allow it to transmute. This is a way for me to feel and transmute. Please know that I am ok and have a lot of supports; and I am leaning on them.

The day after my grandfathers’ death my grandmother was having heart pains and went to the hospital in LaJunta. The hospital decided to send her an hour away to Pueblo to see a specialist. Once the specialist saw her, he said she had Takotsubo or what is commonly known as Broken Heart Syndrome. He told our family that because of the emotional trauma she had experienced, her heart changed shape. He explained that Takotsubo is a Japanese word for Octopus trap and it is common for the heart to resemble this shape after an emotional trauma.

I have heard of older individuals dying after their partner, but I didn’t know your heart could change shape. I also didn’t expect someone in the medical community to acknowledge emotional trauma as a cause for physiological changes. When I work on people through Core, I know that our emotions affect our body. This was an extreme example that surprised me and didn’t surprise me all at once.

In the waiting room at the hospital were my dads cousins, my grandmothers’ sisters, my cousins, aunt, uncle, my uncles’ family, my sisters and their partners, my partner, my nieces and nephew. My family comes together when we need each other and for that I’m grateful. Most of us were in and out of the hospital visiting with each other and one or two or three people were always with my grandmother while she was in the hospital for about five days. She was monitored to see if her heart would resume it’s appropriate shape, but it did not and she had surgery to have a pacemaker implanted. She is doing well physically now and is still dealing with the loss of her husband of over 60 years. I still have trouble seeing her cry; I have never seen her emote so much.

During all of this, my grandmother expressed a sentiment that I had never heard from her before, but had always felt in her presence. She said that she always felt like a mother to me; that she was mothering me. This feels so true and I almost lost a mother during this process. Not, of course, my actual mother, but someone who mothered me. Shit; what a fucking crazy thought. 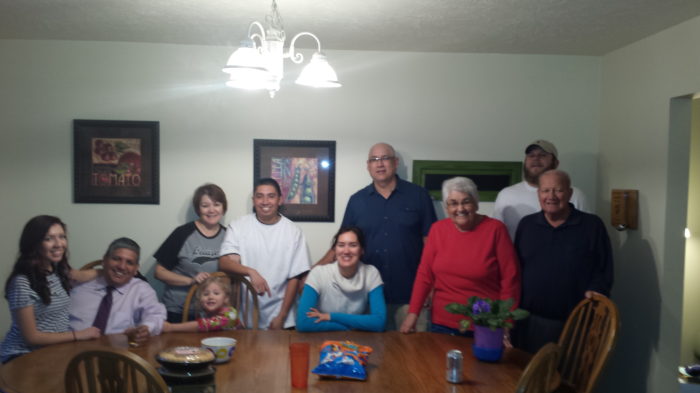 Life is beautiful and painful. As I write this I listen to a dance mix that I created for my office mates. We haven’t listened or danced to it yet. But it is helping me feel all of this and allow my physiology to discharge and process. I invite you to move after reading this; it’s heavy stuff. I invite you to do something that brings you joy, even when feeling something difficult. It’s the ultimate human experience.

P.S. Perhaps now I’ll be able to move on to the crisis series 🙂

P.S.S. One of my sisters is taking the picture at the top, so none of my sisters are in this picture. This was the day my sister Sara told our family that she was pregnant with her second child!